Have ideas for new markets you want to see on Polymarket? Submit them here: https://tally.so/r/kwkgrw.

This week we introduced a new pardon market for Ross Ulbricht, the founder of the Silk Road - a darknet marketplace primarily known for the sale of illegal drugs - which operated until his arrest in 2013. Ulbricht was convicted of money laundering, computer hacking, and conspiracy to traffic narcotics by means of the internet in 2015, following which he was handed a double life sentence plus forty years without the possibility of parole. 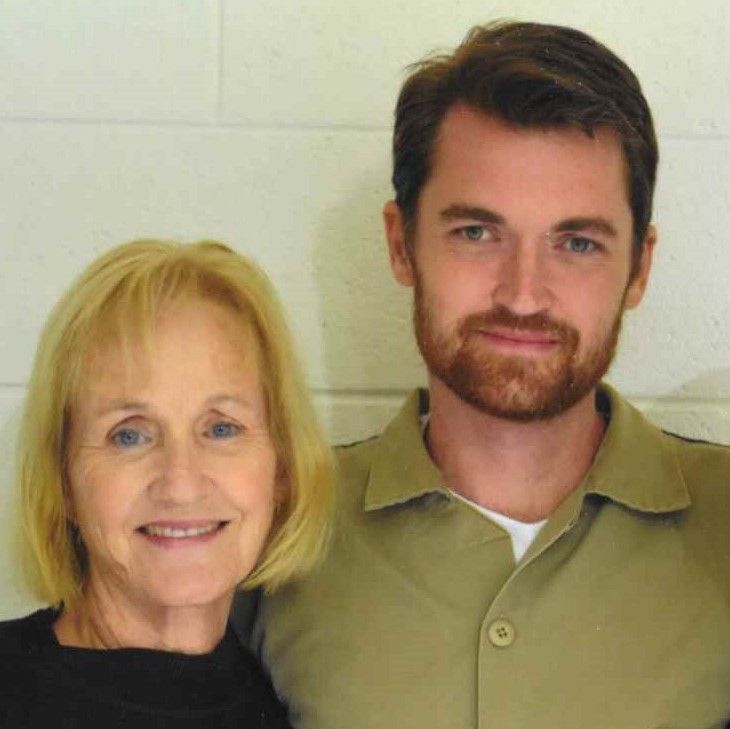 Since then, Ulbricht has garnered public support through the organization FreeRoss, and it has been said that he has earned the private sympathy of President Trump. Whether or not that sympathy will culminate in a pardon before Trump's term comes to an end is another matter, though, and traders seem to think of it as unlikely, but far from impossible. As of Monday, "yes" outcome tokens were trading at around 20c, with just under a month remaining in Trump's first term to issue pardons.

The market on $BTC breaking $20k, which closed last week, was one of our most wildly popular to date. So when $BTC smashed through the $20k threshold, it only made sense for us to launch an even more ambitious market, which has already experienced well over $300,000 in volume.

If you're looking for an arbitrage opportunity or even a hedge against your Bitcoin position, this might be the market for you. Incredibly, traders have already bought the "Yes" side up to $.77, indicating that traders see the most likely scenario for Bitcoin as being a continued bull run. For the moment, though, $BTC seems to have leveled off at around $23k, which means there's still considerable room to run before this market can resolve to "Yes" by March.

BTC Price as of December 21

What will Coinbase's market cap be 1 week after it starts publicly trading?

After dozens of suggestions, a new market on cryptocurrency exchange Coinbase's future market cap was also introduced. The company's IPO, which is slated for early 2021 with Goldman Sachs reportedly having been hired to bring the company to market, is currently the center of attention in the crypto world and could have widespread implications for institutional adoption of Bitcoin and blockchain technology. Early trading saw Coinbase's anticipated market cap hovering around $45 billion, a remarkable figure emblematic of the influx of retail investors to the stock market in recent months and years, as well as the institutional appetite for the world's first publicly traded cryptocurrency company. It's certainly symbolic of cryptocurrency's bull run and rampant optimism in the space.

This market is scalar, which means that traders are able to take long or short positions depending on how they think Coinbase will trade relative to the current estimate. Think investors will push the stock even higher when it opens trading? Go long!

Use this market to gauge the likelihood of an influx of new capital into the Cryptocurrency asset class. To break this threshold will likely require significant reallocation of capital from legacy markets and financial instruments into Bitcoin. 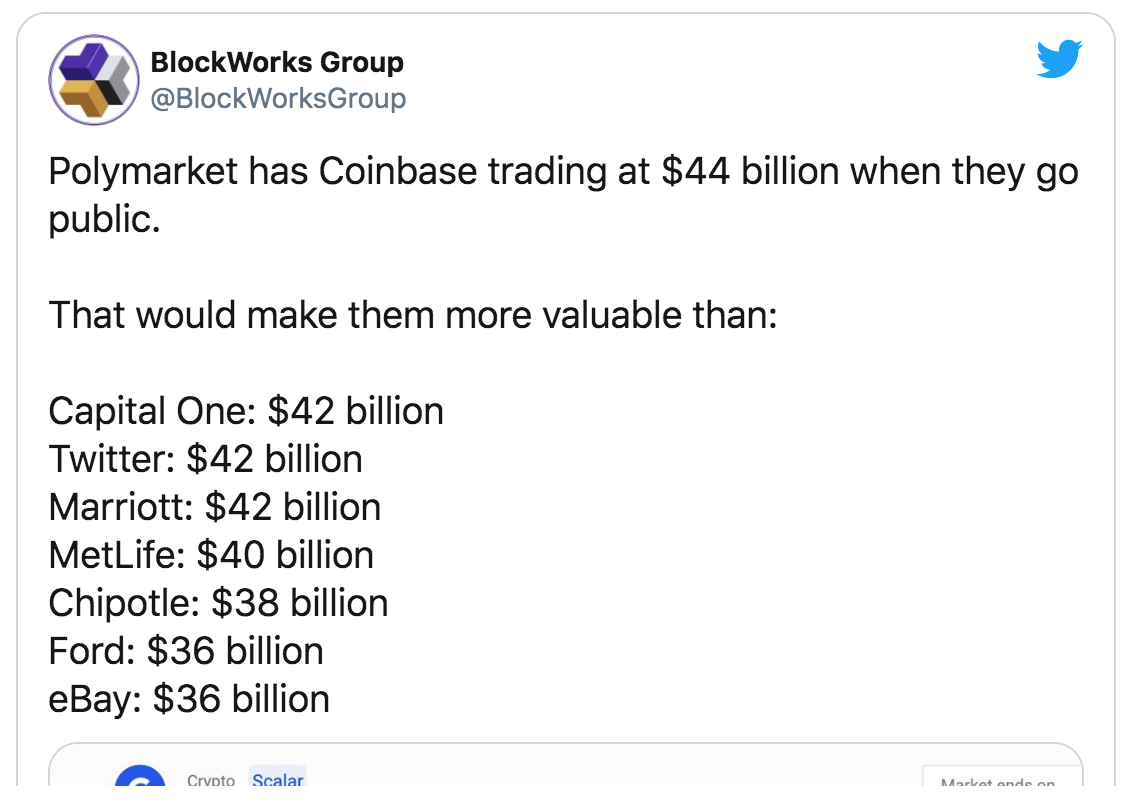 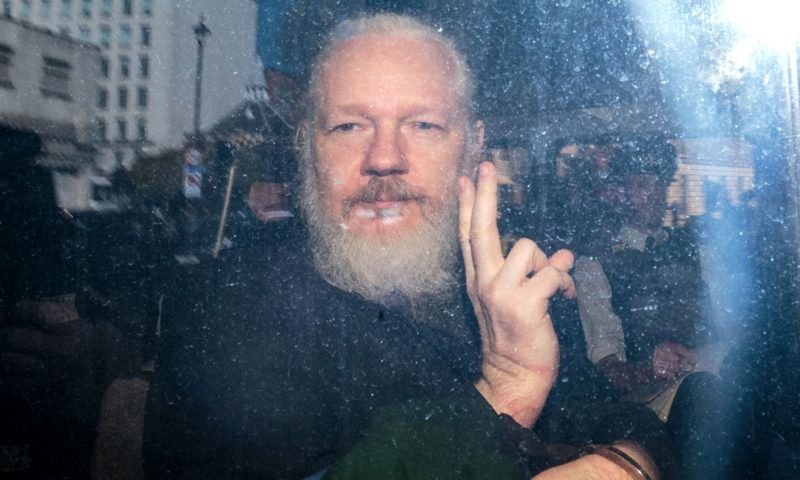 Last Monday, a tweet from Pastor Mark Burns - an early supporter and associate of President Trump - claimed that a Presidential pardon for Julian Assange was imminent, sending "Yes" tokens in Polymarket's pardon market soaring. Just two hours later, though, another tweet from Burns sent those tokens back from 91c to around 10c, where they had been trading previously.

Burns claimed to be the victim of a "faulty source", and asked followers to "disregard". Despite that, the attention drew commentary from high-profile politicians like Justin Amash, who tweeted "Pardon Assange". Since then "Yes" tokens have climbed steadily, eventually settling at around 30c. 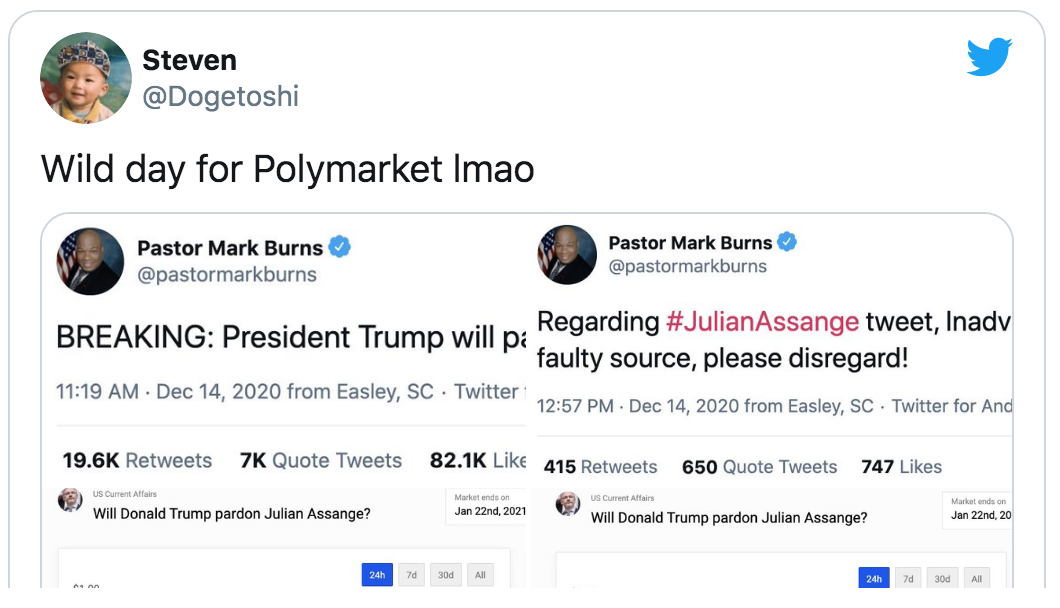 Assange's partner, Stella Morris, responded to the initial news by saying that she was "trembling with anticipation" that Assange's two children "might have their father home for Christmas". Speculation surrounding the potential subjects of a Trump pardon has abounded in recent weeks, particularly concerning the possibility that Trump could grant himself a pardon prior to leaving office - a move he has repeatedly seemed to confirm as being a possibility on social media. 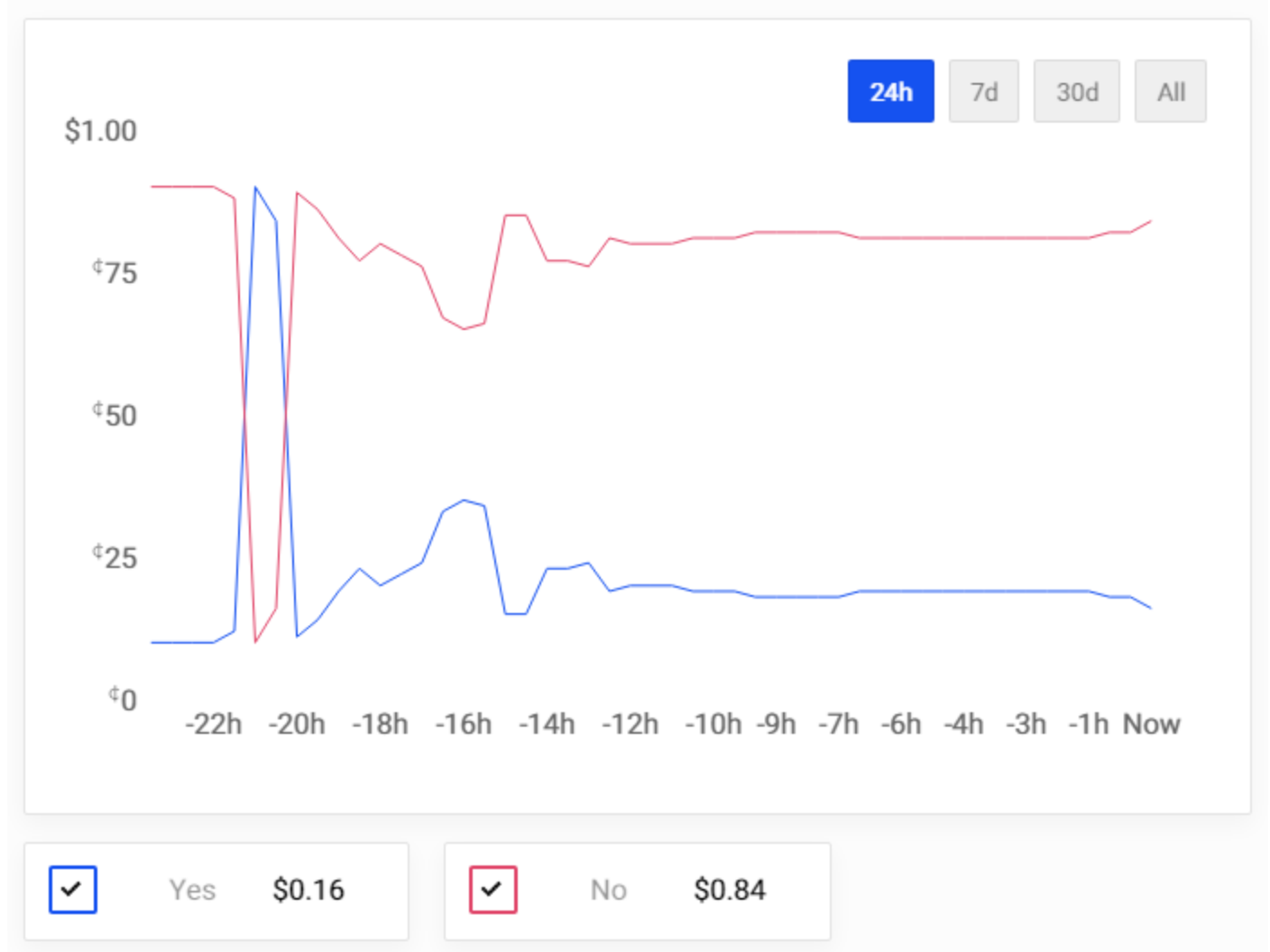 The 24-hour graph following rumors of an imminent Assange pardon. 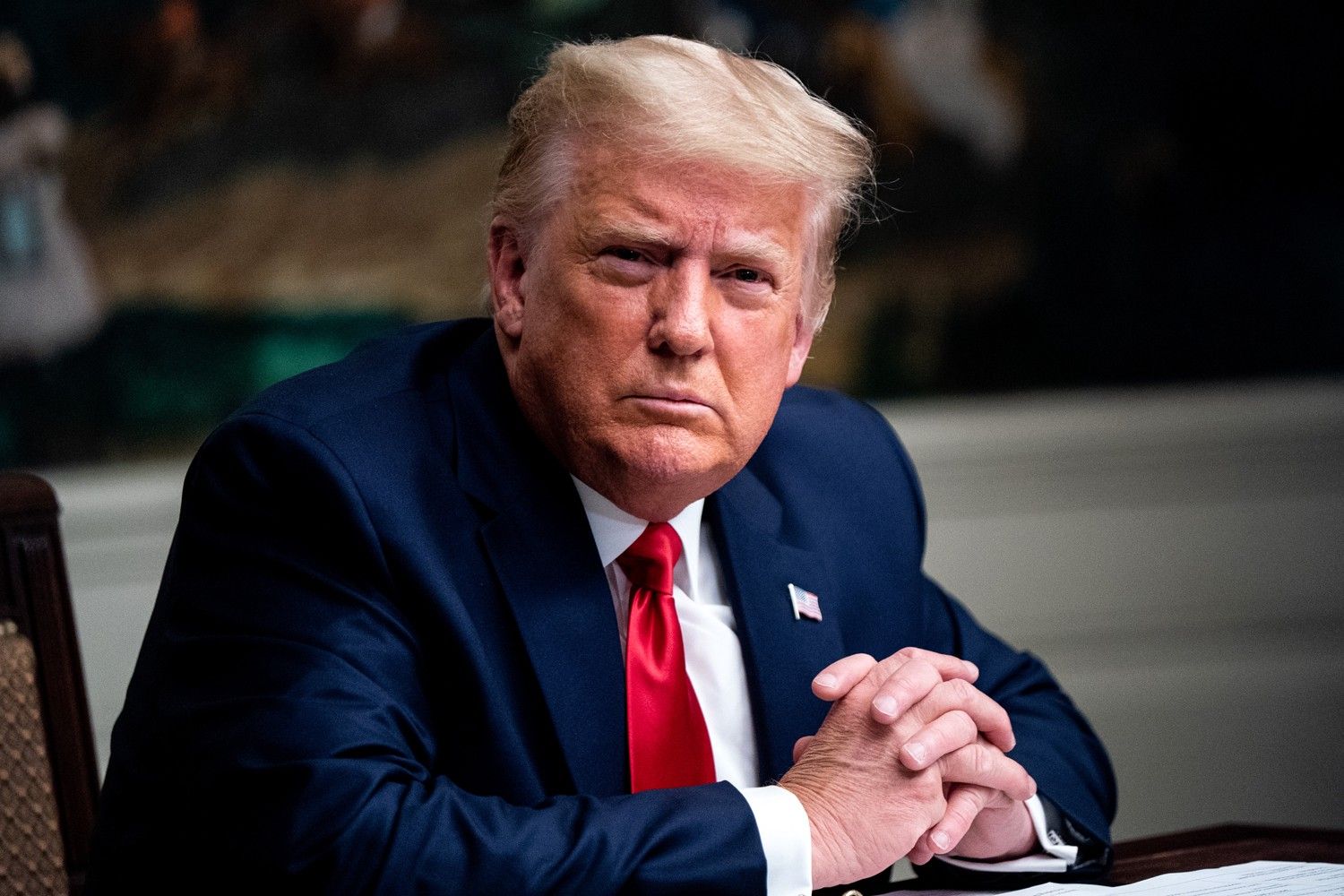 Traders have also been speculating on the likelihood that a formal congressional challenge will be issued by Republicans to dispute electoral votes cast for Joe Biden, which some see as being one of Trump's final tools to overturn the election results. A formal objection under the Electoral Count Act would require at least one member of both the House of Representatives and the Senate to sign their names when the two chambers meet on January 6. Alabama Representative Mo Brooks has already signaled his intention to do so, with President Trump tweeting out praise weeks ago.

The question now is whether any Republican Senator will be willing to attach his name to that objection. Some have speculated that either Senator Ron Johnson-WI or Senator Rand Paul-KY could be the one to do it, though neither has commented on that possibility publicly. This wouldn't be the first time such an objection has been attempted - in 2016, House Democrats issued an objection to Trump's victory but failed to gain the support of a Senator.

Polymarket traders seem to think things could play out differently this time, though, with "Yes" tokens trading at $.60 as of Monday.

Join our Discord, where we talk about all things Polymarket (and just about everything else). Reach out via Twitter (@PolymarketHQ) or via our live chat. We'd love to hear from you.

Until next week, happy trading. -The Polymarket Team